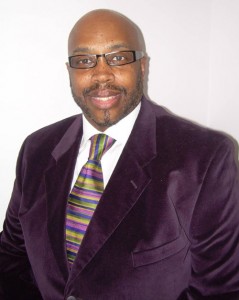 Overseer Tyrone A. Samuel is the youngest of three children born to the late Mr. Herbert E. Samuel, Sr., and Mrs. Eva A. Samuel, in Detroit, Michigan. He was educated in the Detroit Public School system and later attended the University of Detroit and Henry Ford Community College both in Detroit, Michigan, with a  focus in accounting.

As a child and teenager, Overseer Samuel attended the Saint Paul African Methodist Episcopal Church in Detroit, Michigan under the leadership of the late Reverend and Mrs. J. A. Abraham, and Reverend and the late Mrs. C. E. Owens. It was there that he first surrendered his life to Jesus Christ and accepted Him as his personal Saviour. He held various positions as Sunday School Teacher, Usher Board and Youth Department Presidents, Celestial Choraleers Director, and Junior Trustee.

It was after joining the Northeast Detroit Community Choir in November of 1975, under the direction of the late Brother Arthur Mason, Sr. and Reverend Roderic A. Edwards, Sr. that these great men of God introduced Elder Samuel to holiness and the baptism in Jesus’ Name according to Acts 2:38.

On Sunday, February 7, 1976, Overseer Samuel confessed that he was blessed with the precious gift of the Holy Ghost with the initial evidence of speaking in tongues on Monday, February 8, 1976. From that experience, Overseer Samuel followed the  leading of the Lord to attend the charter meeting of Power-House Temple on March 4, 1976, and thus became a founding member of this awesome move of God, under the leadership of Elder Roderic A. and Elder Reginald J. Edwards. Moreover, under their pastorage, Elder Samuel was ordained as a Minister of the gospel of Jesus Christ on September 22, 1979.

Through a word of enlightenment from the late Evangelist Dorothy M. Shackelford, which was later confirmed by Bishop Robert C. Jiggetts, Jr., Overseer Samuel relocated to the Newark, New Jersey area. While this was not the move he was considering for his life, Overseer Samuel consulted with his pastors Elder and Evangelist Edwards for their blessing and approval. After receiving their consent, he followed the leading of the Lord and moved to Orange, New Jersey in November of 1988, and united with Greater Liberty Temple Universal Church Of Christ, Incorporated where the pastor is the Bishop and Prelate, Bishop Robert Clinton Jiggetts, Jr.

With God’s direction, he has accepted the call on his ministry to expand the influence of the Kingdom of God and increase what he is doing for the Kingdom by moving to the Allentown, Pennsylvania area where Restoration Tabernacle was birthed.  Pastor Samuel can truly say, “The Lord Has Done It Again!”

He shares his love for ministry with his wife for life and his greatest supporter of more than 29 years, the former Evangelist Tonya A. James. The Lord has blessed Elder and Evangelist Samuel with one daughter Tiffany Antoinette and a host of spiritual Children.